From  http://hiexcomics.blogspot.com
Hi-Ex, is the Highlands international Comic Expo. Bringing Comics and geeky goodness to the highlands and beyond. 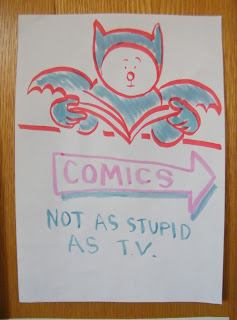 This weekend was 2D- Northern Irelands Comic festival. We had heard great reports from comic creators about what a wonderful friendly event it is, so I ( Vicky ) was very happy to be asked to attend and run a Comics workshop at it. 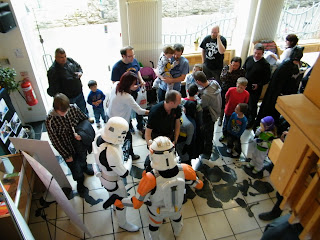 2D is held at Londonderry / Derry in a beautiful part of Northern Ireland. Due to family and work constraints I could only attend the Saturday of the event which runs from Thursday to Saturday at the Verbal Arts centre in Derry. I’d left home in the usual last 10 minute rush hastily throwing things into a bag and leaving wet primed canvases on the easel. The usual overworked chaos was exacerbated by the fact that Richmond’s car ( the more affordable to run of our 2 ) had sprung a petrol leak, so we transferred to my dog hair filled gas guzzler to drop the dog off at my sons and complete the six hour plus journey to Troon. Ferry to Larne, overnight at Richmond’s parents, then a 5.45am start & Rich drove me to Belfast Central station for the train to Derry. Sadly I slept through what is apparently one of the worlds great railways journeys, the last mile or two which I did see were certainly scenic. Rousing my fuzzy head from sleep, I scribbled some workshop plans down in my jotter. I have a few set workshop plans, but every session is always different depending on the group of participants, so I try not to get stuck on set scripts. This workshop was to produce a one page comic strip in an hour. I would normally come laden with resources, books and comics, but with all the travelling my kit was no more than a few spare rulers and rubbers… and now some scribbled notes.
As the Taxi dropped me off at the venue, I was immediately met with a warm welcome and friendly crew, who despite being in the middle of setting up heroic Ciaran stopped to make me at feel at home with a cup of tea.
READ THE REST ON http://hiexcomics.blogspot.com