Back in mid June I was fortunate enough to get a way in advance review copy of Image Comics excellent upcoming comic Pigs. Based on a second generation KGB cell living in the US long after the fall of communism…and they have just been activated. The book goes is released this Wednesday and Declan Shalvey has posted on his blog that he and his colourist girlfriend Jordie Bellaire have a first issue variant cover for the book. Take a look below at the cover and read on after that for a spoiler free review of the first issue. 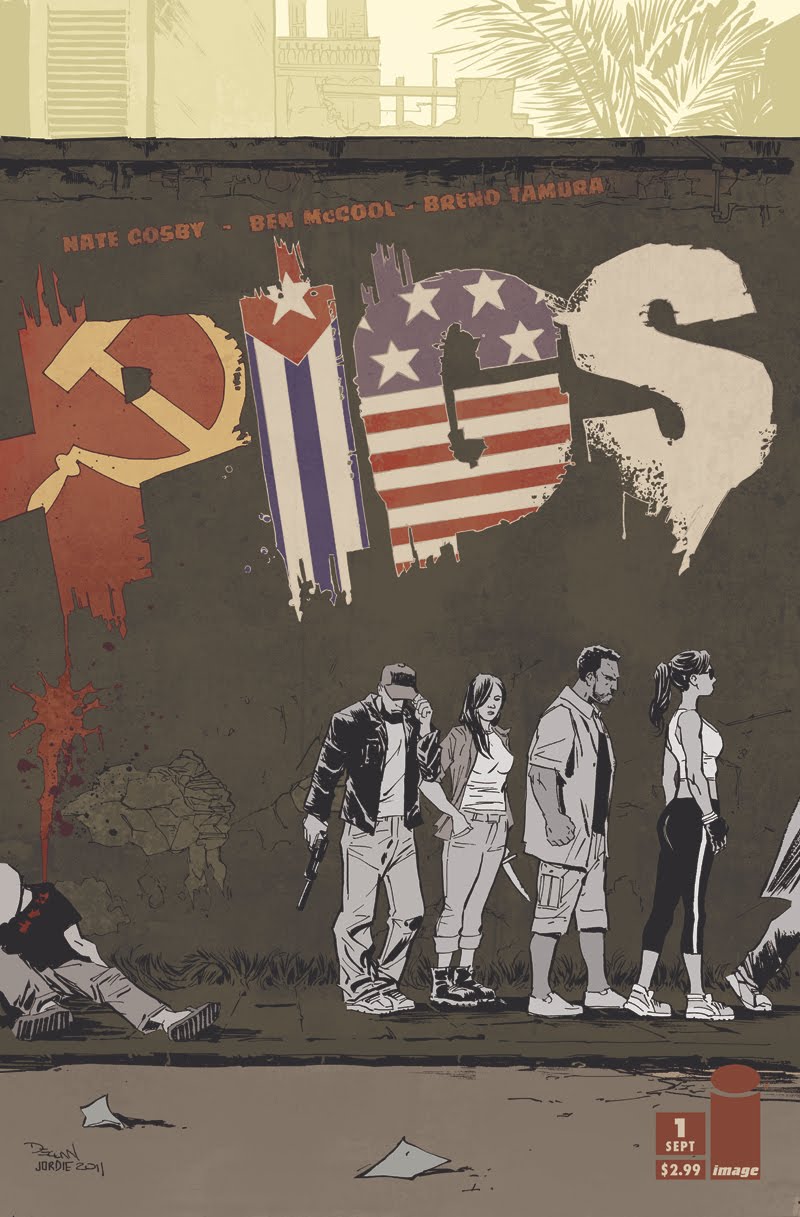 The credentials of the creative team mark this book out to be one to watch. Pigs won’t hit shelves until this Wednesday and I won’t reveal anything untoward here. But I will be highlighting how much of a great buy that this book is going to be on its release.

Nate Cosby is more known for his editing at Marvel Comics than his writing and Ben Mc Cool is a seasoned writer most notably on Choker with Ben Templesmith. Together they form the writing team on the book and within the first issue go and blow me out of the water. Espionage stories that reference the tumultuous early sixties I find, are fascinating reads, in either comics or books, so the fact that this story is based around events in the sixties is appealing to me. The story itself could be misconstrued as an action/espionage story but you would be way wide of the mark as the writers inject a large amount of character moments and it looks like it will be as character driven as much as anything else.
The idea of a second generation of KGB spies just waiting for the word to continue on the mission of their predecessors to overthrow the American government is cool. The mouse chase that will take place as the cell is hunted down by the Americans hints at some great things to come. The first issue is presented almost cinematically and you could easily imagine this as being a huge budget action flick, instead it is an excellent comic book.
Artist Breno Temura is a newcomer to comics and the exposure he is going to get on the back of an extremely strong debut issue will be well earned. His style is exactly what this book needed to round out the package. There are some excellent moody images and scenes in the book that perfectly encapsulate the scripts intended tone. Even the scenes in flashback are easily distinguished from the scenes in the present simply by some deft coloring changes by Chris Sotomayor.
Even when it comes to the cover artists, you are getting great value for your bucks as with Jock here on the first issue with the regular cover and of Dec Shalvey on the first issue variant, you get Francesco Francavilla next issue and you get Amanda Connor, Humberto Ramos, Ben Templesmith and Becky Cloonan after that. What a line up!
Image Comics is on an absolute tear lately with this being the latest in a line of great first issues. Following on from All Nighter and Graveyard of Empires and now Pigs, is there anyone else putting out comics as good as Image. I don’t think so. When this book drops later this week, you owe it to yourself to pick this up, you won’t be disappointed.