After I wrote this post about the early 80s Belfast small press anthology Ximoc, a conscious attempt to do something apolitical in a politically fraught time, Gar left a comment that “I dream of the day I see a politically engaged small press comic these days”, and Victor Marsillo reminisced about Resistance Comics, an underground series by north Belfast republican cartoonist Cormac in the 70s.

Cormac, aka Brian Moore, passed away earlier this year. Starting with Resistance Comics and the Belfast People’s Comic, he was recruited by Republican News, the paper of the Belfast brigade of the Provisional IRA edited by Danny Morrison, in 1976, later taking his strip Notes into the Sinn Féin paper An Phoblacht when the two papers merged in 1979 and continuing it until 2004. He represented in cartoon form the view of the faction led by Gerry Adams that came to control the IRA and led to the ceasefires and the peace process, and in years to come his work will no doubt be an invaluable resource to historians. A bit of historical distance can do that. But on the ground in Belfast in the days when violent atrocities were not uncommon, I can’t blame the Ximoc crowd from wanting to distance themselves.
It’s said that the CIA have found comics to be the most effective medium for disseminating propaganda, and the cartoonist’s art has a long history of that in and about Ireland – a lot longer than you’d think. You can’t research cartooning and Ireland without falling over books about how Victorian British caricaturists depicted the Irish as savage and ape-like, but they’ve been cartooning us much longer than that.
There’s a manuscript in the National Library of Ireland originating in England and dating to around the turn of the 13th century. It contains a copy of Gerald of Wales’ Topography of Ireland, whose depictions of Irish savagery were much resented by early modern Irish historians. But the marginal illustrations! They start, tentatively, with drawings of the flora and fauna described in the early part of the text, but it’s when Gerald starts talking about Irish people that the scribe starts to enjoy himself. Here’s some half-naked savages:

Then, an illustration of Gerald’s notorious description of a supposed kingship ritual, in which the initiate has sex with a white horse, which is then slaughtered and turned into a broth which he bathes in and eats:

And finally, some axe-murdering! This guy is so a cartoonist.*

After this manuscript, things go a bit quiet for a while. Three and a half centuries or so. In 1581 John Derricke, an English customs agent working in Drogheda for Sir Henry Sidney, Queen Elizabeth I’s Lord Deputy of Ireland, produced an extraordinary book called The Image of Irelande. The bulk of the book is of no interest to us, consisting of a long poem on the history and genealogy of England and Ireland, justifying the English right to rule. The next bit is what’s interesting. Twelve double-page woodcut illustrations with accompanying verse narration, and in some places dialogue, telling of how the Irish “woodkarne” guerillas fell on an English settlement, and were subsequently pursued and defeated by the English army under Sidney, and ends with the submission of  Turlough Luineach Ó Neill, king of Tyrone, in Dublin in 1578. 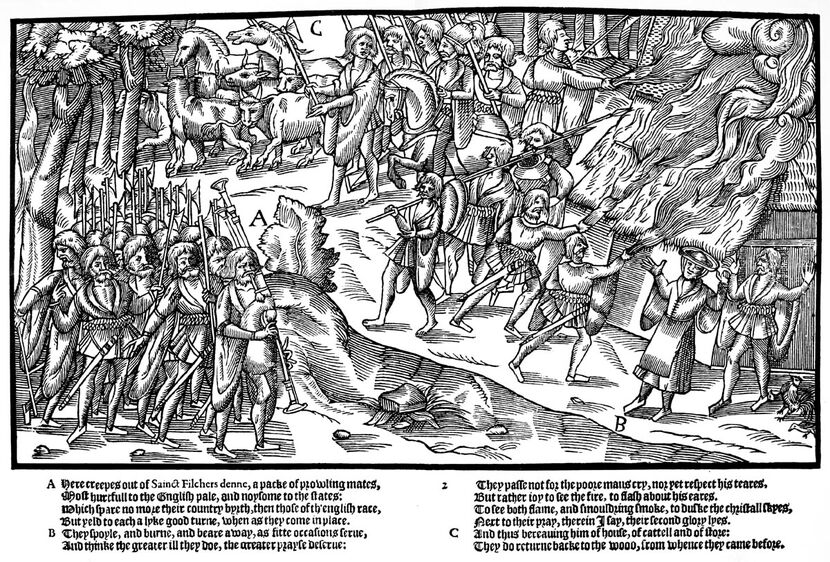 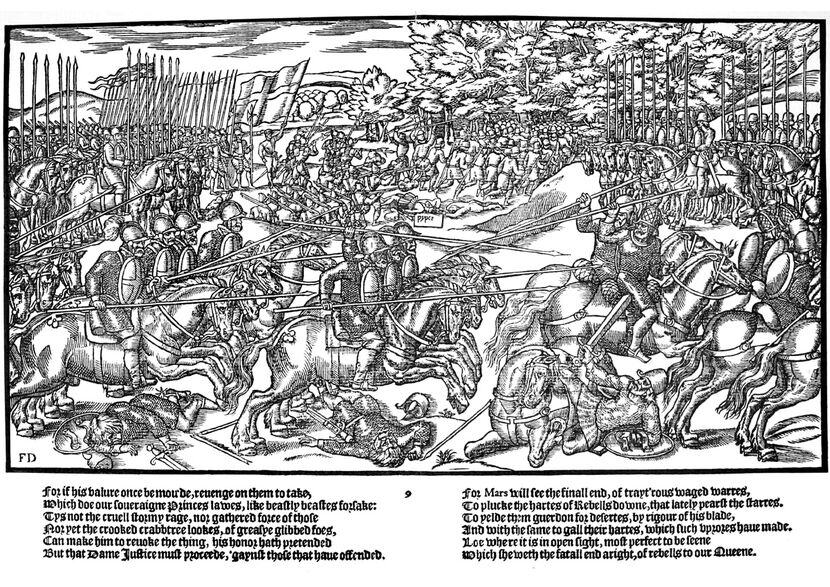 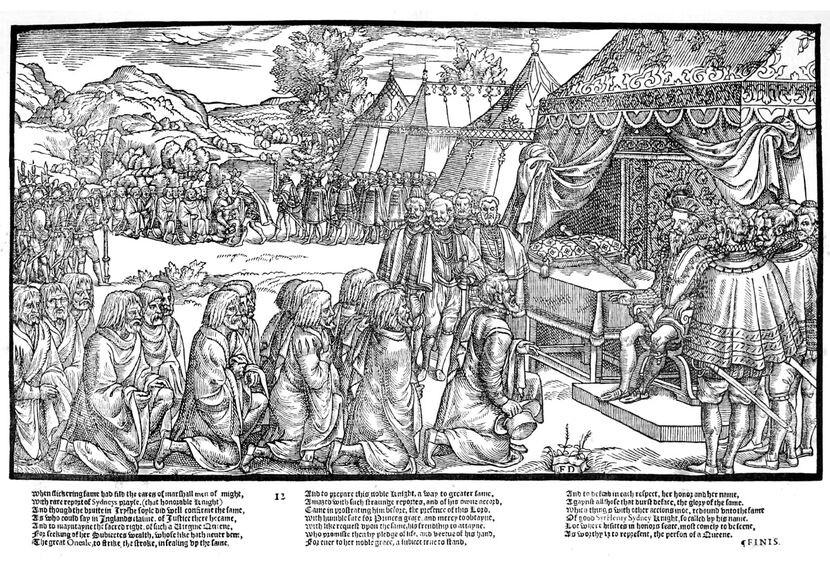 This is, strictly by McCloud’s definition, a comic, three centuries before Töpffer. It’s also an extraordinarily vivid visual document of the period.
Now let’s skip forward to a contemporary of  Töpffer, William McComb from Coleraine. A religious poet, he was known as the “Laureate of the Presbyterian Church”. He was also a follower of the Rev. Henry Cooke, who chased Daniel O’Connell out of Belfast when he tried to hold a pro-Repeal monster meeting there in 1841. McComb made a book out of it, The Repealer Repulsed. Most of it’s prose, but it also includes cartoons, with speech balloons, ridiculing O’Connell and bigging up Cooke. 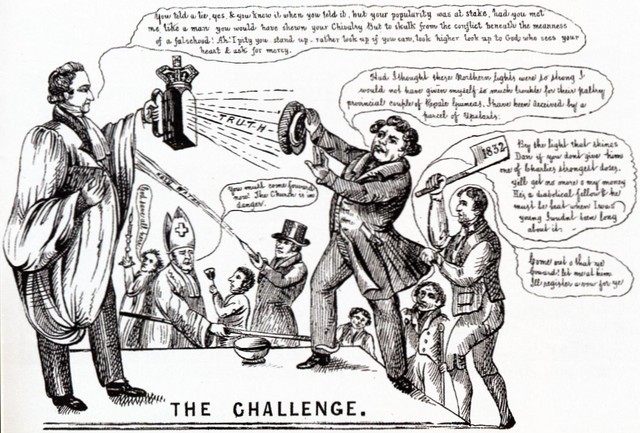 All of these are better comics than Éire, Sean is Nua (“Ireland, old and new”), a 48-page Irish language comic on the history of Ireland produced by the Irish Christian Brothers and drawn by George Altendorf in 1953. The Christian Brothers had been producing a story paper, Our Boys, a conscious attempt to inculcate nationalist and catholic values in schoolchildren by the medium of the adventure serial, since 1914, and it’d had an Irish language comic supplement, Tir na nOg, since 1946, but the Brothers’  idea of a comic was horribly conservative – essentially a prose narrative with accompanying illustrations.

Altendorf does his best, but it’s very staid and stiff, and feels far more old-fashioned and less lively even than McCombe, Derricke or Gerald’s anonymous illustrator, and certainly than contemporary comics in Britain, America, Europe and Japan. Somehow, though, Fine Gael TD Patrick Byrne managed to be horrified, describing it in the Dáil in 1962 as a “horror comic”, “full of blood-curdling accounts of battles, executions and persecutions”. He also objected to its political bias. It was hardly kind to the Brits, rather glossed over the Civil War, and depicted a future of piety and prosperity under the church’s leadership, but perhaps the bias he particularly objected to was party political – a copy had been personally presented to Éamon de Valera.
Anyway, a brief sample of how comics and cartooning have been used for political and propagandistic purposes in Ireland over the centuries. For a bit more, you might like to read a piece I wrote on my own website about cartooning in Ireland, and by Irish cartoonists in Britain, in the 18th and 19th centuries. Thanks to Gar for going to the National Library of Ireland and getting scans from Éire, Sean is Nua.
*Edited to add: have discovered there’s another manuscript of the Topography of Ireland in the British library that looks like it’s illustrated by the same guy. I’ll have to keep an eye on the BL’s website for when this manuscript gets digitised, see what else there is.

Edited again: The British Library have digitised some extracts and illustrations from this manuscript. No longer sure they’re by the same artist, but one is evidently copied from the other. Some of the illustrations are versions of the same image, others are different. I’ll see what I can find out about the relationship between the two manuscripts.