Markosia Comics ‘The Indifference Engine’ has gone on sale today featuring artwork by the ICNA nominated artist Rob Carey and written by Cy Dethan. Take a look below for information on the book from a press release from Markosia and at the end follow the shortlink to read a  preview of the book.

The Indifference Engine: A Holographic Novel

“Responding to a strangely specific job advertisement, Alan Blake, a distinctly ordinary twenty-something suburban slacker finds himself in the middle of an inter-dimensional task force staffed entirely by superhuman alternate versions of himself. Struggling to fit in, he uncovers a conspiracy that strikes at the very heart of the organisation – a conspiracy that only he can stop.”

“Being a science fiction fan,” says Wayne Hall of Sci-Fi Pulse, “I sometimes ache for a comic that will challenge my perceptions of the world, of the universe, of my way of thinking…The Indifference Engine scratches that itch spectacularly!”
This is Cy Dethan’s third original graphic novel from Markosia and he is joined this time around by hot-shot new artist Rob Carey, along with colourist Mel Cook and letterer Nic Wilkinson.  Following the convention-busting performance of the horror- noir Cancertown and the surreal gangland thriller Slaughterman’s Creed, it already looks as if Dethan’s first creator-owned sci-fi story, described by John Freeman as “a gripping, nihilist alternate reality adventure” will be enjoying the same levels of success. Dethan first explored the genre for Markosia as writer of their Starship Troopers line.
The digital version of the book has already been incredibly popular. “Cy Dethan’s script is superb on this book,” said John (Sci-Fi Art Now) Freeman on Down The Tubes, “This [is a] tightly-written multi-universe-spanning adventure tale and it’s…definitely a book to look out for.”
A free preview can be read at http://tinyurl.com/26g6e7k
Preorders can be made through the Markosia website at http://tinyurl.com/44ezrzx 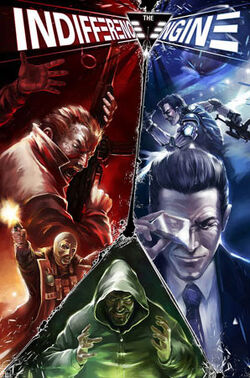