IN MY OPINION: Drawing Digitally [TK:IMO]

Continuing on the digital side of things that both me and David have talked about in previous columns I want to direct your attention to another area of digital comics. Or more precisely digital art in comics. About 90% of all Art I have ever created in my adult life have been digital in origin. From about 20 episodes in, Road Crew was all done in Manga Studio, Something Wonderful was Manga Studio as was DOWN.  The episode of Road Crew that appeared in TKP#1 was half digital half real world, where the pencils were digital with the inks on bristol board. I love drawing digitally. There are way more possibilities, way more scope to experiment and to my mind, prints better.
So what’s the problem? Well, for the most part its seen as cheating.
Or being lazy.
Or making up for lack of talent.
or [add your favourite].
Now I know that the tide has changed slightly. Brian Bolland, Adam Hughes and Dave Gibbons amongst others have paved the way for digital art to be acceptable in the mainstream of comics. Its a welcome change and one that is likely to become more the norm than the exception. I remember when Steve Oliff started colouring AKIRA on a computer and everyone went gaga over it. Now there is almost no one who doesn’t colour comics digitally. Having said that, I certainly don’t hope that comic art ends up all been done digitally as I really love the look of original art on paper.
But I digress.
Although there is way less of a stigma attached to mainstream artist “going digital”, it has a different aura in small press. Or more precisely, its different when you are not famous.
The amount of times that people look at my art and say they like it only to sigh: “ah…” after I tell them its done on computer is quite staggering to me. Even within artists circles it happens.

As I see it, there are two reasons for this:
1: People think that you are only pretending to draw and are in effect cheating everyone into believing you are better than you are. You are a hack, no talent waster, who obviously hates children and puppies.
2: People believe that there is a magic button on the computer that allows you to draw comics just by pressing it.
The second one is, obviously, easier to dismiss, although a large proportion of the general population honestly think Photoshop is some sort of miracle worker that allows you to do anything by simply “photoshopping it”. Photoshop has become the new Jesus.
I sometimes think people think that “drawing digitally” means that  the computer, having become sentient, draws the images while you, the so-called “artist”, sit there drinking coffee or watching porn. But because this is further from the truth than even science fiction allows it also goes somewhat to destroying the other reason people balk at digital artists.
DRAWING ON A COMPUTER IS NOT FUCKING EASY!
If you have never opened Photoshop,Manga Studio, Illustrator, inkscape or Gimp then you have no idea how complicated those programs are. And if you have worked with those programs you will testify to the fact that no matter how much time you have spent with them you have only ever grazed the surface of what they can do. There is  a massive time commitment involved in learning to draw digitally with one of these programs. Add to that the pure strangeness of using a graphic tablet for the first time. The hours spent playing computer games hasn’t really allowed you to master hand/eye co-ordination as much as ou hoped.
Maybe after the months, nay years, of getting to grips with Photoshop and a graphic tablet you decide that maybe you’d like to learn to use a 3D program to use as reference. So, you spent a few months learning the program, shouting at the monitor, crashing your hard drive and fighting with the dog until finally you get to grips with it and start using your new skill to improve your art. Then you are told that you are nothing more than a  tramp and a charlatan for using reference and of course, no real artist would ever do that. [More on using refernce next time, stay tuned folks] 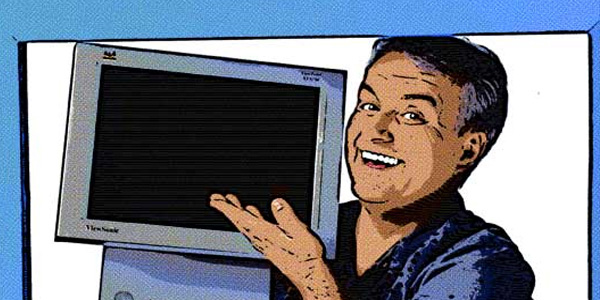 What the Photoshop magic Button actually does

SO what’s my point? Well its simple. If you have only ever bother to learn how to draw using a pen or pencil, then shut up you lazy dog. Digital artist have spent way longer than you on their craft. They are more eager, determined and better looking than you. If you are a punter and think that computers have a magic button, then take yourself out behind the sheds and slap yourself hard in the face.
I beg you, next time someone shows you some art they have done,  telling you that they did it with no reference at all AND that it was all done in pencil and brush, look at them, disgusted, and say “Have you always been this lazy?”