NEWS: On The Shelves Next Week – Roche, Shalvey & Ennis

Next Wednesday sees the release of several books with an Irish flair. Nick Roche’s work on IDW’s Death of Optimus Prime one shot is brought forward one shipping week where IDW crush all Christmas cheer by killing the famed robot just in time for X-Mas. Dec Shalvey continues his great run on Marvel’s best team book with a new Thunderbolts and Garth Ennis knocks out the final issue of his great Butcher mini series from Dynamite. See below for info:
IDW – Death of Optimus Prime #1
Writer :  John Barber
Artist :  Nick Roche
Publisher : IDW Publishing
Diamond code : OCT110326
UPC : 82771400300000111
Celebrating 125 issues of IDW’s Transformers! After Chaos, Optimus Prime’s fate was shrouded in mystery. Was he truly gone or could there be a way he had emerged unscathed? Now, Optimus sits in contemplation, in a place he does not recognize as home. And with the cost of the battle finally taking its brutal toll, does Optimus Prime even have the will to carry on? CHAOS changed everything, and Transformers #125 sets a new direction for the Autobot leader…”
Marvel Comics – Thunderbolts #167

Writer :  Jeff Parker
Artist :  Declan Shalvey
Publisher : Marvel
Diamond code : OCT110667
UPC : 75960605602616711
TO CATCH A MURDERER, THE BOLTS MUST BECOME HIM! Hot on the trail of Jack the Ripper, the Thunderbolts have to battle their own teammates – and discover a dark secret that will push them to grisly choices. Meanwhile, in the modern age, the Ghost make a devastating decision to capture the fugitive Thunderbolts! 32 PGS./Rated T+
Dynamite Entertainment – Butcher, Baker, Candlestickmaker #6 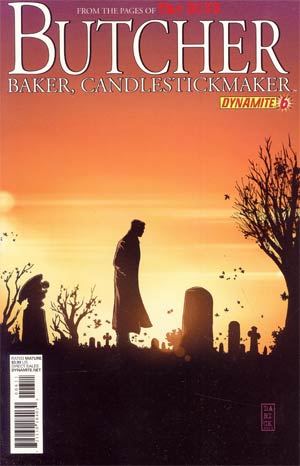