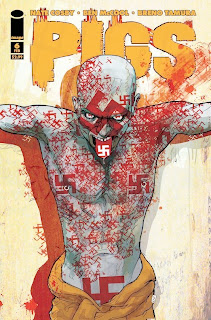 A side note about the issue; the cover to the book raised a few eyebrows when it was released last year with Diamond’s Previews book even editing the image on the cover to remove the body art of the issues bad ass inmate Fred with the explanation given that it is illegal to publish images of the swatztika in Germany. Image’s Eric Stephenson called it ‘strangely revisionist’, but there you go.
Following on from last issues audacious plan to get an inmate on the inside of San Quentin to commit murder in the name of the plan, the crew find themselves now having to contemplate having to break into the prison themselves.
The scripts to date have been slickly written with just enough nuggets of info laid in front of the reader to tease them. This issue’s flashback scenes were the most telling to date with the complicated triangle involving Havana, Felix and Ekatarina explored with scathing detail. These scenes provided a great framing device for the rest of the book. It will be very interesting to see how the plot laid out here will develop when the group encounter Fred, a monster of a human being with obvious affiliation to the Nazi Party should they gain access to San Quentin. I don’t want to give too much away when it comes to this books over arching plot as I implore new readers to find this book on their own and discover a great secret of comics.
I’ll have to be careful as to how I characterize Will Sliney’s contribution in this issue as I don’t recall any work of his being so sexually charged. His flashback scenes help convey a point of some of the characters past that I didn’t see coming but in hindsight makes sense as to how we see some of the tension with said characters in the latter day. In that sense it was a nicely executed piece of storytelling both visually and through the narrative.
Breno Tamura, the regular series artist, serves up another delicious plate of graphic storytelling. As the book progresses I am beginning to see with more clarity the skill set that he brings to the book. His grasp of layouts and his style are great. Working of a great script the book looks as good as it reads. One stand out scene in the issue takes place in the mess hall and I don’t know what the script called for but the presence of the imposing Fred at the table is enough to clear those sitting around him and the dialogue-less panels told more than any script could and you get to appreciate an artists contribution when you see pages like that. It only adds to the overall enjoyment of the issue.
This book deserves every superlative being thrown at it at the moment. Fear not though if you think that the story is too far along to jump on as the first collected volume has just gone on sale and it is a great start point for one of the stand out books of this past year and as the next arc gains its legs you could do less than to try it out. It is one of those all too rare books that grabs a readers attention on several different fronts at once and grips you from moment one. Highly recommended.