Longstone Comics artists are a few artists to be featured in an upcoming comic Romantic Mayhem, which is a comic being created by the brainchild of Superhero Showcase creator Gar Shanley.
It will feature contributing art by Ian Pettitt, Deirdre de Barra and ICN’s Hilary Lawler according to the Longstone site.  The collaborative comic will feature a long list of accomplished artists such as Elida Maiques, John Robbins, Archie Templar, Alan Nolan, Ronan Kennedy, Luke Fallon and many others and looks to be a brilliant mix of styles and ideas.
No official release date has been set but the Longstone Comics site reports that the editing process is under way.
The book will be published under the imprint National Tragedy, the logo of which was designed by de Barra which you can see at the bottom of this post.
Take a look below at some teaser art from the book from Hilary and Deirdre.
http://longstonecomics.wordpress.com/
http://puredaft-delineavit.blogspot.com/ 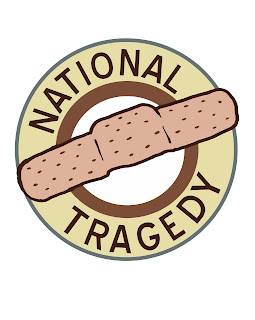