With the release of a new anthology of Irish comics along the theme of romance, I pulled up a candlelight and soup for a date with editor and publisher, Gar “Uncle Fugger” Shanley.
Andy Luke: You’ve assembled sixteen Irish artists to pull together 52 pages of love comics. From my view, it seems they’re drawing on the heritage of the genre. Is this fair, and was the subject matter a nod to the musicality or populist appeal of the theme, perhaps lesser tapped among today’s zombie market?
Gar Shanley: The genre of the romance comic seems deader than a zombie which I think is a pity because they were popular and, had they survived, they would have played a part in keeping comics from being as purely associated with sci-fi as they are today. Romance comics might have advanced and matured (as sci-fi comics have done …um …maybe) and who knows what could have come of it. What really interested me about these comics was the way they pandered to the (supposed) concerns of young girls. Such sensitive stories, often involving a heroine who worries about how she is perceived by others or what some boy thinks of her. It’s very different to the gung ho of boy’s fare of the time. Interestingly, there is a notable difference between U.S. romance comics and British ones from the late 50s to 60s and early 70s. The British heroines are often quite confident and, despite their better judgement, have fallen for some hapless twit who needs sorting out. I recommend Valentine Picture Library for anyone interested. Some of the stories found there are actually very funny in a ‘laughing with’ as opposed to a ‘laughing at’ way.
Anyway, I thought the genre would be a good jumping off point for an anthology but contributors were free to take things in any direction no matter how tangential. Most stuck to the familiar conventions though. The collection is eclectic but coherent. Everyone gave it their best.
Collectively, we are known as National Tragedy. That’s the imprint name dreamt up by Hilary and Ian over coffee. We might do another anthology or two or fifty or none. We’ll see. If we do the theme/jumping off point will change each time.
AL: It’s a more-ish, representing collection of Irish comics artists; trusted names known by ICN readers. Elida Maiques was one I didn’t know and her weblog has some very pretty pictures giving a fashion item element to the package. Knowing Phil Barrett and Deirdre deBarra are in there, I think this would appeal well to readers of Solipstic Pop or Phonogram. How surprised were you (knowing the artists), by what they added to the dreams in your head? What were the group’s influences? 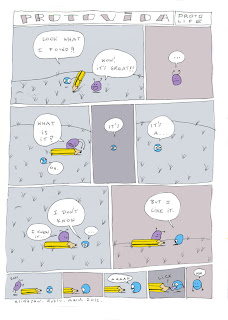 GS: With my own collaborations and Tommie’s great cover I wanted to stick to a recognisable send up of the genre’s conventions and provide a few pegs from which to hang the overall collection. I thought that way the others would veer off in all sorts of directions – although I did not prompt anyone to do so. However, everyone had a good look at the Digital Comics Museum and Cover Browser and we all ended up coming from roughly the same place, which surprised me. Contributors brought their own thing to their tales though – John gave things a modern realist twist and Cathal added a large dose of Douglas Sirk. Mindpuss brought the very bizarre body horror (he’s an odd un and no mistake) and Elida did a Fellini on it. (I don’t really see her work as “fashion item” myself. I think it’s very surreal, imaginative and just plain good. You should try and pick up her own mini-comics at Independence Day). Deirdre and Paddy took the look of the original fare and stuck authentically and perfectly to it, not overselling the gag element. Archie brilliantly combines the old romance style with the old EC style – proper narrative art storytelling from him too. Luke F. is probably the guy who thematically ran furthest with the ball, as in right off the pitch and down the road. I like his two pages a lot. He’s unique. Hilary and Ian provide a splash of vibrant spacious ker-powness/lushness amongst the denser content. Al and Davy bring an old school IPC touch which really adds to the eclecticism and Philip did a great job illustrating and very cleverly designing John’s text story. Last but not least, for me the biggest laugh comes in a promo for cigarette filters courtesy of National Tragedy ad man Papa Hotel. 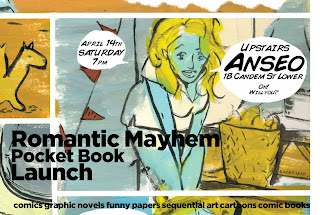 AL: If I’m at http://romanticmayhem.wordpress.com/the launch party at 18 Candem Street Lower in Dublin on  Saturday April 14th from around 7pm I can get a copy. Or at the http://independentsdaydublin.blogspot.co.uk/ Independents’ Day Zine Fair on Sunday April 22nd. Or http://2dfestival.com/ 2d in June. How else may I get hold of the book?  There a few different editions?
GS: There’s no online shop yet but contributor Paddy Brown (you should see his on the nail take of the 60s/70s Brit girl’s comic in RM) will be selling it in Belfast and we’ll get it in as many comic shops as possible. The first run is 300 only and also there is Archie’s excellent deluxe Blurb format. The regular edition is a cheap and cheerful affair. Nothing fancy production value wise. I’m thinking of future editions that will be a bit more fancy pants but a few quid dearer. Part of the reason I proposed this anthology was that I heard of a means by which we could get something involving a lot of colour put together for half the usual price. It’s an experiment of sorts.
AL: How much of the style of your weblog Fugtheworld has worked it’s way into the scripts, and can we expect to see the beloved Uncle Fugger blog in book form some time? It would sit very nice next to a Charlie Brooker collection.
GS: There’s a bit of Fugger in my four RM collaborations but I was trying to keep to the more conventional side of my creative self. That doesn’t mean I was compromising, I was just working that way because it suited the project and I love the results (I’m very fuckin lucky to work with artists like Deirdre, Paddy and Archie). I am likely to do anything on the blog. http://Fugtheworld.blogspot.com Fugtheworld.blogspot.com was actually originally a comic called Fugger but there wasn’t that much of a response to it in comparison to the others I’ve done. The blog has a regular following, nothing massive. I’m thinking of putting something together for regular readers of the blog to send off for. I was recently inspired by a small exhibition of the work of Howard Finster. I’d like to do some comics in that style and also rope in some old friends of mine who used draw amazing comics many many moons ago. We’ve discussed it. I think the next comic I do (anthologies aside) will be Fugger. Not sure if I’ll collect the blog together as a book soon. It’s there if you want it for free. Fugger in print would be original and mainly illustrated material.
Thanks Gar. To see a preview of Romantic Mayhem, check out the http://romanticmayhem.wordpress.com accompanying weblog.