Prior to the latest issues release of Short Sharp Shocks at the 2D festival this weekend, Ger Hankey has kindly given ICN a sneak peak at the new book. The anthology book done in its entirety by Ger and to date the first two issues of the series are among my favourite books by any indie Irish creator so it’s east to say I was looking forward to this book. 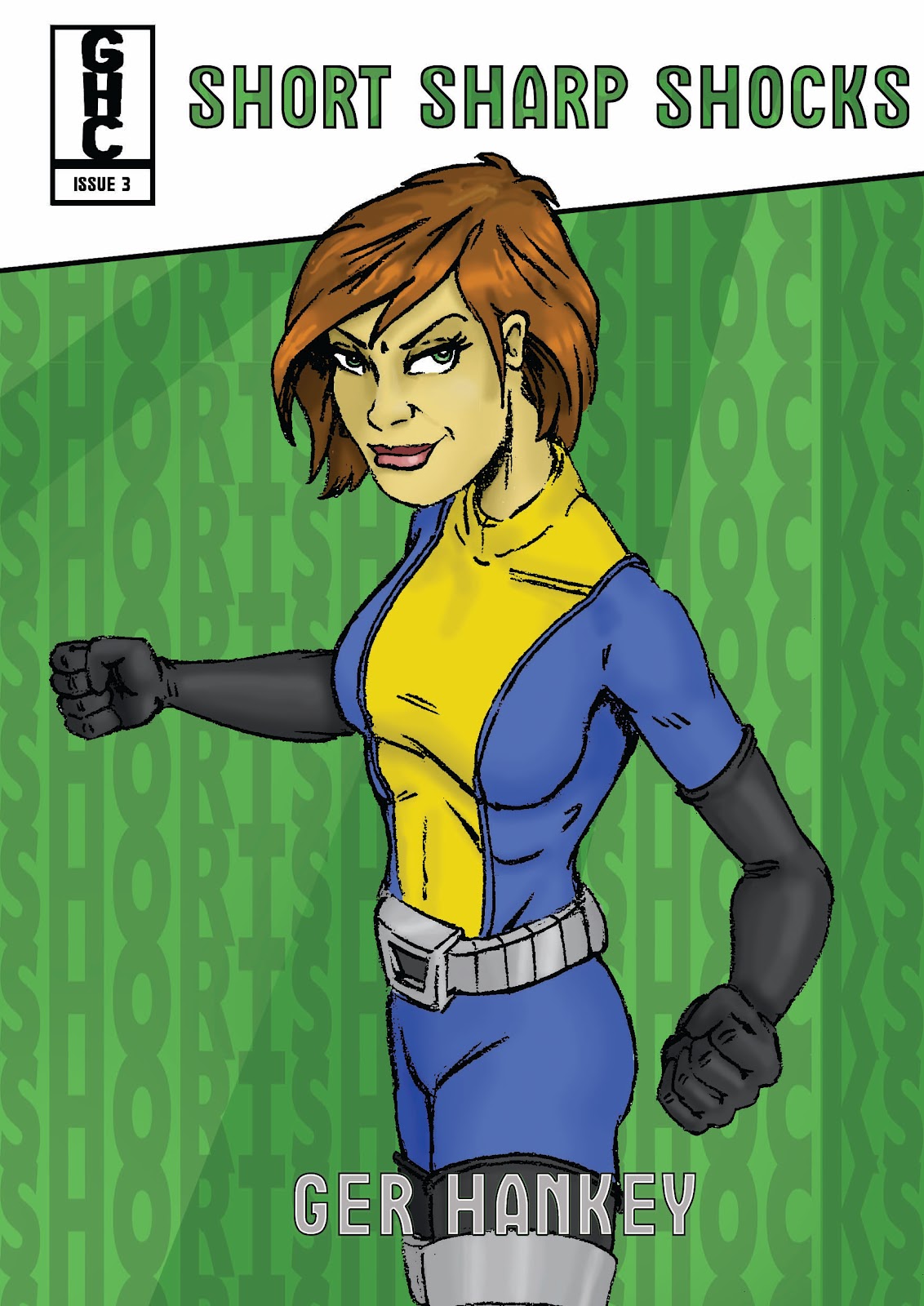 Short Sharp Shocks #3 created by: Ger Hankey
REVIEW: I find myself eagerly awaiting any new work from Ger Hankey if I am being honest with you. Short Sharp Shocks has become a favourite book of mine and the time between issues only makes you look forward to new material only that much more. If you are unfamiliar with the format of the book, it follows the same set up as before with several strips making up the book featuring some returning stories al a Hybrid and Mighty Morgon.
The first strip up in the new book was Hybrid which is one of two strips that have been mainstays since the series launch along with Mighty Morgon. This particular story was actually first printed in the new Lightning Strike Presents anthology book that went on sale recently but for those who haven’t read it there and know the strip from its previous appearances in Short Sharp Shocks will know what to expect from the gender bending hero. The humor that Ger bleeds into his scripts is always finely balanced with the action adventure feel of his stories and with this strip playing leadoff for the rest of the book it set a great tone for what was to follow.
The second story is of Might Morgon. After doing the world a favour last issue and wiping Jedward off the face of the earth Morgon is still finding it difficult to get the world to fear and hate him. So with the help of his faithful lackey, he goes back to the sixties where he thinks it will be easier to take over the world and with it have a populace that will truly fear him. Of course things don’t go exactly to plan true to Morgon’s style and the continuing misadventures of the World’s leader continue to be a highlight of the series. This strip more than the rest of chock full of pop culture and visual jokes which is a strength of a writer/artist who uses both sides of the creative process to tell as much story as space allows.
The third strip is along the lines of rescuing the damsel but instead of a knight in shining armor you get a robot in shining hard drives and a female space farer who will do anything for a bit of excitement. What she gets instead is drawn into the middle of a domestic and this strip is an issue highlight for me with its structure and premise. Hankey has a fine grasp of story structure and it is no better highlighted than when he works on this singular strip.
The final strip is a one that is always an artist’s exercise in storytelling. This story is told in a similar vein to the silent story that Ger told in the last issue and is called ‘The Ultimate Battle’ featuring Pirates, Ninjas and Robots. You have to show huge respect to a creator who tells a silent story as the obvious point of the exercise is to relate the story visually and Ger pulls it off perfectly.
With the printing of the third issue, Ger has repackaged the first two issues in the series with new covers to give the books a more uniform book and hopefully it will open up a whole new audience to the great works contained within. Ger’s unique style of storytelling is a great selling point for him and I wish him every success with the new book and look forward eagerly to number four.