ICAW: MONDAY'S COMPETITION HALF PAST DANGER

Everyday this week we will be running compettions to win some amazing artwork from some of the amazing comic talent that Ireland has produced. First up is an original HALF PAST DANGER Variant Cover Artwork (ARTWORK AT BOTTOM OF POST)  from the mighty Stephen Mooney! 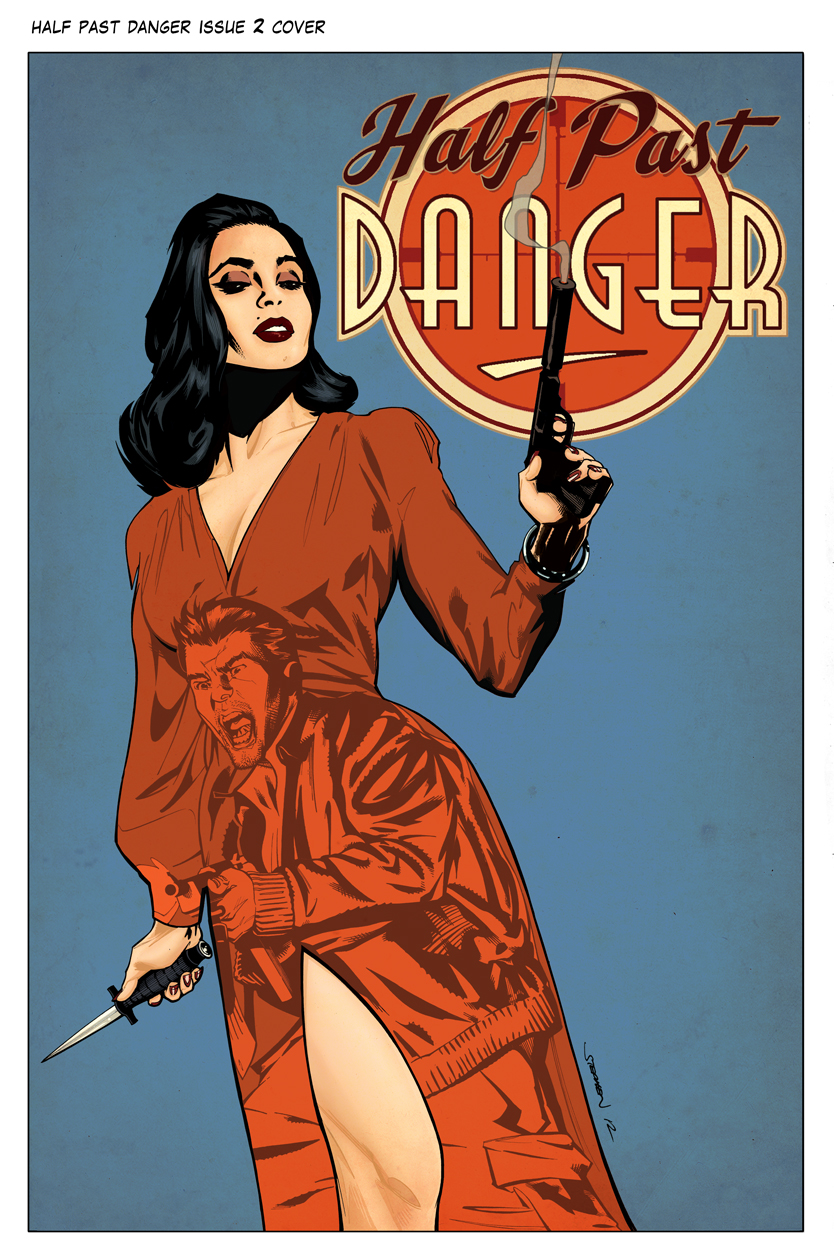 So What Exactly is Half Past Danger?

STEPHEN EXPLAINS:
“Well, it aims to be high adventure of the pulpiest vintage.  It’s the tale of an Irishman(surprise surprise) serving as a US marine in the pacific theatre of WW2 during 1943. He becomes embroiled in a rather hairy situation out there that has potentially worldwide ramifications. As a result he gets dragged into a heart-pounding adventure that encorporates British spies, US super-soldiers, one rather cheerful ninja, and most importantly; Nazis versus Dinosaurs. Pterodactyls v Messerschmitts, Panzers v Giganotosaurs.
I’m hoping it’ll be a heck of a ride, very much in the vein of the classic matinee serials that influenced the likes of Raiders of The Lost Ark, The Rocketeer and the 60’s Bond movies. Adventure serials like Dick Tracy, Tarzan, Doc Savage and Flash Gordon. All going according to plan it will share the pace and tone(if not the quality!) of those movies and serials. Lofty aspirations; I know. But these are the kinds of high adventure stories I’ve always loved and gravitated towards, and I have what I think are some pretty cool and original angles and ideas. And besides, aim high or go home, right?”

HOW TO WIN THE ARTWORK

Simply tell us what is the name of the Female Character that is featured in the Half Past danger #2 cover seen above? If you don’t know go to Stephen Mooney’s Production site http://www.halfpastdanger.com/ and flick through his posts and you find the answer. You’ll also find out more about his amazing new comic and how he put it all together.
Send your answers to  icaw@irishcomicnews.com
with ICAW MONDAY COMPETITION in the subject title
ALL COMPETITIONS ARE OPEN UNTIL MIDNIGHT ON SUNDAY 24th JUNE 2012. WINNERS WILL BE ANNOUNCED ON MONDAY!