It was about this time last year that I decided that the time was right to take a stab at creating something of my own. I’d been working fulltime in comics for about eight years, mostly on licensed properties for IDW, and it had been great. Especially the three years or so working on their ANGEL property. Definitely the highlight of my career (do I have one of those?) up until that point.
But things were starting to get a tad stale; a little samey. I was developing a bit of a reputation as a go-to guy for comics starring real people (well, actors) that needed to be turned around in a tight timeframe. Now, don’t misunderstand me here; that wasn’t the worst reputation to have, not by a long-shot. My editors knew I was disciplined and could meet a deadline, and that I would always do my utmost to do the best possible job in the allotted timeframe. It wasn’t uncommon for me to be asked to turn around 22 pages of pencils and inks, plus more often than not a cover, in three or four weeks . Sometimes less. Even in the world of monthly comicbooks, that is fast. But I was working on properties I thoroughly enjoyed, and hell, I was grateful for the work.
It was a fantastic time, I did some pretty good work with some really good people. The big problem was, I wasn’t doing anywhere near my best work. There is certainly something to be said for having a deadline looming; it forces you to get the finger out and to get the bloody hell on with it. Removes complacency and second-guessing.
But it rarely affords you the chance to do great work. I speak only for myself here, but most, if not all of my work in comics so far has been a case of ‘it’ll have to do’.
I always did the absolute best job I could with the time I was given, but I was never particularly happy with anything I turned out, and always, always had the niggling feeling that given just a little more time, I could do much better.

So as I say, a year or so ago I decided that the time was right to take a step outside the relatively-secure arena of licensed work, and try my own thing. If I had two full days to complete an inked page, one for pencils and one for inks, could I make the work as good as I’d hoped? Well, if I knew the answer to that… what I did know is that there’d be no excuse for the stuff not being my best work to date. How good it could be, I didn’t and still don’t know. But I did bloody know it would be better. I saved ten grand to allow myself six months to have a real go at it. I had money; now I could put it where my mouth was.
I gave myself the first month to flesh out the idea. I had long been thinking about a story that I’d love to attempt, but it was risky. It involved so many of my teenaged loves, some from wildly disperate genres, that it could end up being an unreadable pile of mush. There was no point in spending over a year on some masturbatory wish-fulfillment, a greatest hits of action-adventure staples that had seeped into my impressionable young brain over the years. Pulp-osmosis. That said, I knew I had to play to my strengths. My favourite projects were all high adventure pulpy Sunday matinee tales, usually period pieces of one sort or another. Raiders of The Lost ark. The Rocketeer. Treasure of the Sierra Madre. It’s a long list. I had plenty of elements and set pieces that I wanted to include. I had main points that I decided MUST be incorporated: An Irish lead character. World War Two. Dinosaurs. Nazis. Femme Fatales. Derring do. Square-jawed can-do types with sticktoitiveness up the wazoo. Ninjas.
All that good stuff. 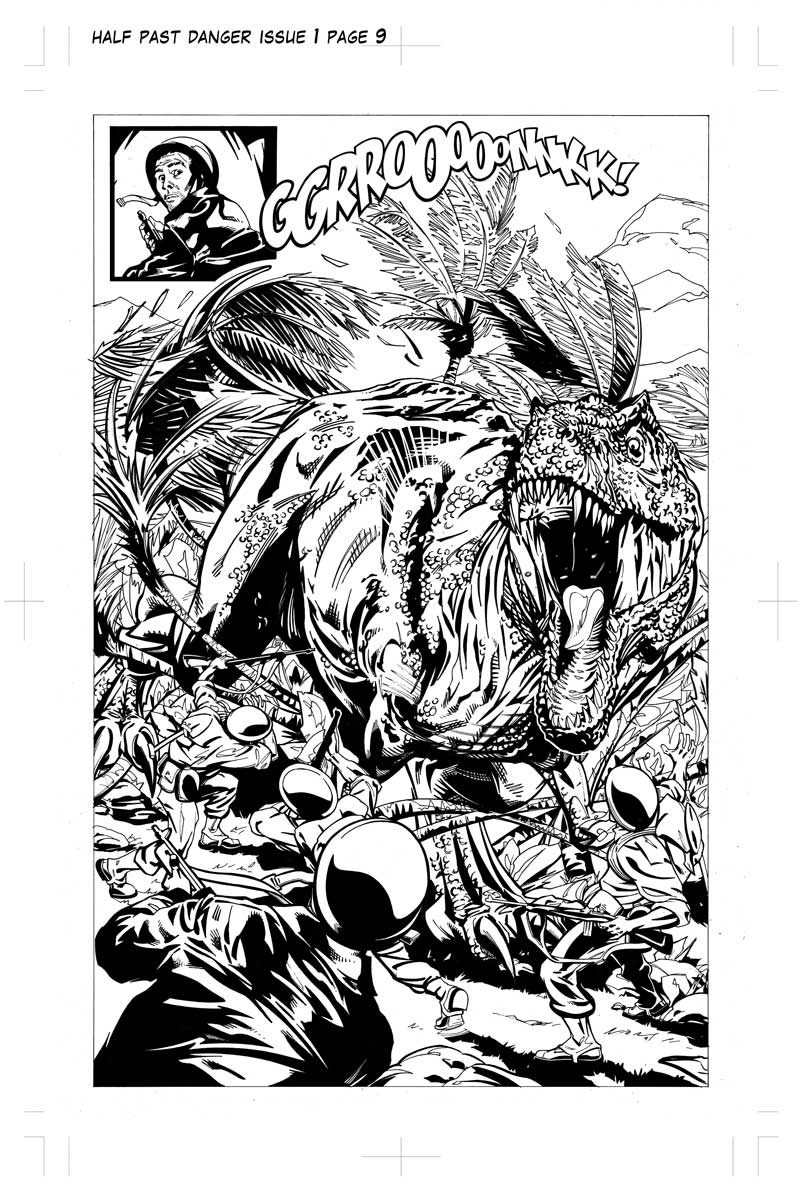 But how to weave all my various ideas and story threads into one cohesive and entertaining narrative? Be ruthless. Chop out any gangrenous tangents that didn’t slot effortlessly and naturally into the storyline that I’d come up with at the outset. So I wrote about ten drafts of the outline, each time whittling down the characters and events until I had everything exactly where I wanted it. Then I re-wrote it again. Rinse, Repeat.
Once I had an outline I was happy with, I started on the actual script. I gave myself another month to produce a completed, final draft. I had an awful lot of the work done in bullet-point form in the outline, so the actual script writing went painlessly enough, it just took me ages to actually type up that sucker, since I still can only prod at the keyboard with two index fingers like the luddite I am. I wrote and re-wrote the script another six or seven times, in each instance shifting scenes, swapping lines, re-imagining action set-pieces, and dropping dialogue. Always dropping dialogue. I was so conscious of not making the rookie mistake of over-saturating the thing with flabby text that I ended up with almost no dialogue at all! I had to actually go back and pepper the thing with a few more wisecracks and exchanges, just to give people something to, y’know, read.
A month later I had a final script I was pretty happy with. I ran it past my support group (The Eclectic Micks – try us, we’re free) and took all of their (excellent) feedback onboard. Special thanks to Lisa Jackson (lovely girlfriend of  Stephen Thompson, and sometime comic colourist) for coming up with a great, great plot element, and to Nick ‘Cock’ Roche, for his exhaustive script notes, and great suggestions. I changed many a scene after his input. Things were coming together.
After nailing down a script I was (relatively, I’ll never be 100%) happy with, it was time for the real fun to begin. Character design has always been one of my favourite aspects of the job, and creating characters from the ground up, origins and motivations included, was even more satisfying. 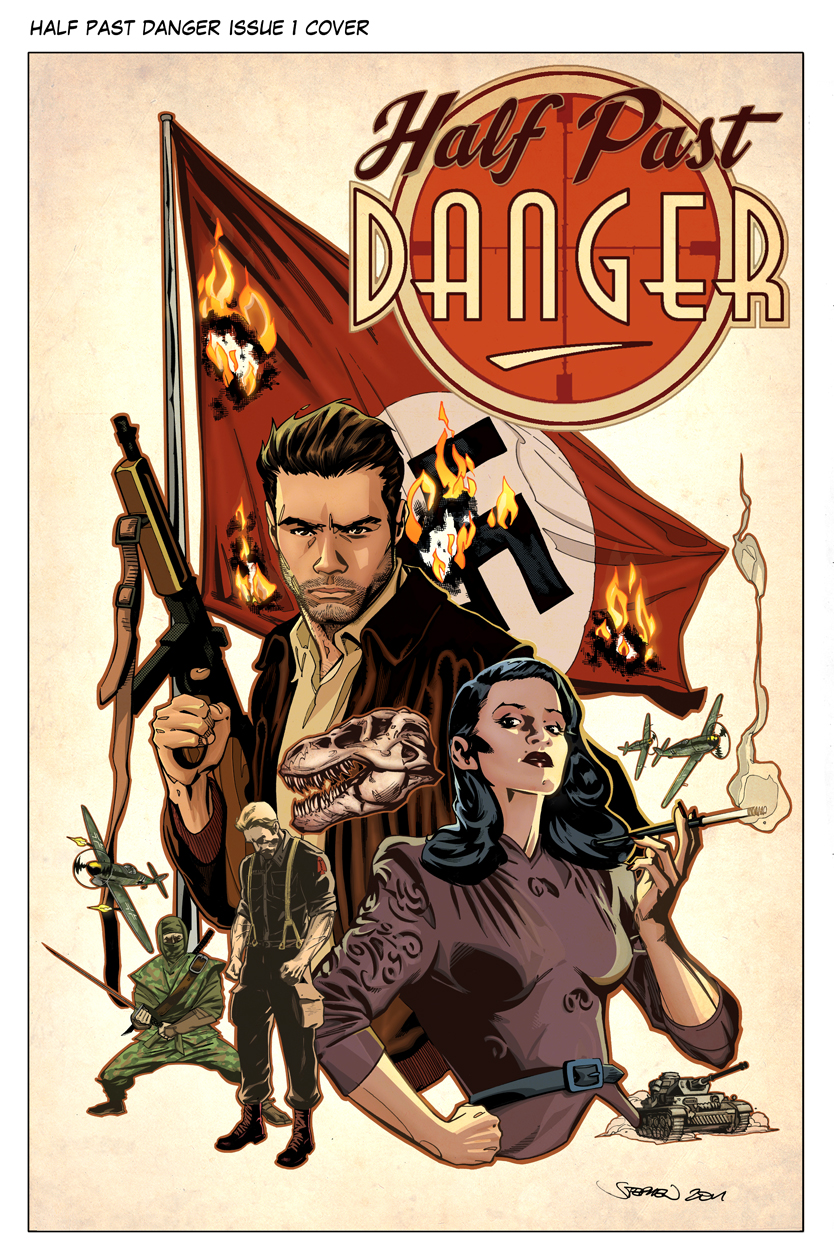 After designing all of the main players, I got stuck into the first cover, which stars most of them. It had to set the tone for the entire series, and also, hopefully make people sit up and take notice. I was delighted at the recent 2D festival when Chris Ryall (IDW EIC) took a look at it, and declared in his oh-so deadpan way, that ‘this is pretty much everything I’ve ever wanted to see in a comic-book’. Obviously, he said it half tongue in cheek, but it’s pleasing to know that there are other people out there on the same wavelength with similar mindsets and taste that might be intrigued by such a cover and premise.

Next were the pages of issue 1. I figured to come out of the gates as strongly as possible, and to make the best pitch/initial impression that I could, I would complete the entire first issue in an effort to attempt to woo prospective publishers (the norm being 6-8 pages of completed artwork). This was a lot of work, especially since I’d be penciling, inking, colouring and lettering all twenty-six pages of the first issue myself. It also affords a lovely sense of control and satisfaction, however, knowing that I’d be ultimately responsible for every single element of the design and story, regardless of whether I ultimately sink or swim.
Two months later, After completing all twenty-six pages of pencils and inks, I began the colouring process. This is where my pace slowed a bit. Up until that point in my career I’d only coloured covers and one-off illustrations professionally, and while doing a pretty decent job a lot of the time, I had always devoted plenty of man-hours to the colouring process. Given myself ample time to figure out the bones of the procedure. I figured that I could devote an entire day to colouring each page of HPD, and that should comfortably be enough, since my pro colourist pals regularly colour four or even five pages per day. Not so much. I managed to complete the bulk of the pages in about 10-12 hours each, or a single day’s work. But many of them took up to a day and a half to complete, one annoying bastard actually took two full days. Perhaps I was being too precious with the pages, and being overly choosy in how I went about it, trying one thing, humming and hawing over it, and then trying another. Regardless, it ended up taking over a month and a half for a process that I had ‘budgeted’ a month for. At the end of the day, I was annoyed with myself for taking so long, but by the same token I was pretty happy with the end result. I’m fairly positive that if I need to bring on a helping pair of hands with any aspect of the book’s production in the future, it’ll be somewhere in the colouring process.
After all of the pages were coloured I added the letters and sound effects (actually completed in four or five days between the inking and colouring, although many of the sound effects were drawn right onto the artboards) to the files, and the pages were ready. I decided to complete the cover for the second issue so that I could finish the pitch with a strong single image, and give a bit of a ‘to be continued’ flavour to the whole thing.
Once the entire first issue was complete, I ‘packaged’ it up nicely in PDF form and sent it off to a few prospective publishers; initially three that I’d ideally like to see it stabled with. And that’s pretty much where things stand as I type, with positive noises coming from at least two of the three. It’s an exciting time, waiting to see if anybody will bite, and also incredibly nerve-wracking. It’d be a bit of a kick to the gut if the book doesn’t get picked up, but I’m pretty sure I’d recover fairly quickly. If nothing else I have a very pretty portfolio piece that I can use to go back to freelancing; definitely my strongest work to date. In fact, it seems the PDF of the book has already piqued some editors’ interest in having me work for them, people that never gave me a look before. So there’s that. But of course, at the end of the day what I really want is for HALF PAST DANGER to get picked up by a reputable publisher, and for myself to spend the next full year completing my story. I really think it’s one worth telling.
And that’s my heroic story.

For more info on HALF PAST DANGER, along with loads of artwork and production notes, please take a visit to www.HalfPastDanger.com and have a poke around.