86 years ago today, Arthur James Conry Booth died of pneumonia, aged just 35. Four years previously he, along with Charles E. Kelly and Tom Collins, founded Dublin Opinion, a satirical magazine that lasted until the end of the 60s that published cartoons by every cartoonist who was anyone in Ireland during that time, from Grace Gifford, James O’Donnell and Maskee (aka William Beckett) to northerners like W. H. Conn, Rowel Friers and Bill Glenn. And the incredibly prolific Kelly, who combined cartooning with a career in the Civil Service (he eventually became Director of Broadcasting and Director of National Savings), and was the father of Frank Kelly, best known as Father Jack from Father Ted.

Plus, in those first four years, Booth’s own cartoons. He was the first editor, and drew the covers, including the one at the top caricaturing De Valera, as well as numerous internal cartoons like the ones above and below. Despite the gentle tone of the magazine’s satire in general, Booth’s cartoons had an edge, depicting the ruin and desolation of the Civil War and the poverty and deprivation after it. 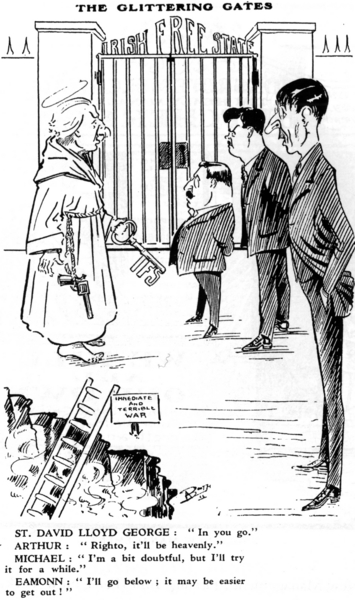 Although we only got four years out of him, he was one of Ireland’s greatest practitioners of the cartoonist’s art, and deserves to be remembered by the contemporary cartooning community. So if you’d all please raise your virtual glasses to Arthur.