It could be just me and I doubt it, but 2012 was an epic year for Irish comics. The amount of content that was published was hereto before unseen and the quality of product was amazing. So to give you an idea of what went on in the Irish comic scene this year I’m going to give you a rundown of the comic releases from the first few months of the year with part two to come soon. The list is probably not exhaustive and if I’ve left someone out drop me a line at david@irishcomicnews.com
February
After a quiet start to the year the slew of releases kicked off in early February with Stephen Coffey’s Celtic Knights #1. On board came American artist Mike Kennedy and the all ages title that features the best of what’s left after 90% of the worlds heroes are wiped out was a hit on both sides of the Atlantic. Review: http://www.irishcomicnews.com/2012/01/advance-review-celtic-knights-1/
Buy it: http://indyplanet.com/store/product_info.php?products_id=6412
March
March saw the release of Land of Button Press’ The Wren #8. Created by Jason Connors and Phil Roe this issue was notable as being the first in the series that was in full colour. Telling the all ages tale of Jack McCormack in the country of Hibernia and his running battles with the villainous magical entities in Dubh Linn.

Review: http://www.irishcomicnews.com/2012/03/review-button-press-publications-the-wren-8/
Buy it: Forbidden Planet Dublin
Jennifer Wilde #2. Written by Maura McHugh and art by Stephen Downey, this beautiful looking book set in early 20th century London is one of the standout issues of the year.

Review: http://www.irishcomicnews.com/2012/03/advance-review-jennifer-wilde-2/
But it: Sub City Dublin and others
March also the release of the first comic this year to have a Mike Lynch credit in Zarjaz #14. The book garnered an Eagle Award nomination this year and Lynch’s Tales From The Black Museum was one of an anthology of stories within.

Buy it: http://www.futurequake.co.uk/shop.php
Finally for March we have Vanguard #2, an anthology of stories for mature audiences that among others features Jim Campbell, Owen Watts (Zarjaz), and Dirk van Dom. 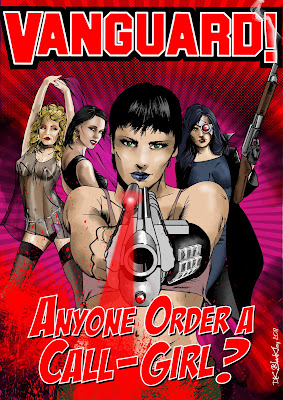 April was a busy month with Uproar Comics Zombies Hi! #5 leading the way with their first issue of the year. This issue continues the tale of the survivors in Derry after the incident in issue four left them feeling like they have enemies inside and outside the city’s walls.

Stephen Coffey’s Pogoroboto #1 saw print in April. Coffey’s scathing eye for adult humour is on show in full glory here with the beginning of a zombie outbreak.

National Tragedy released Romantic Mayhem in April. An anthology that pays satirical homage to the romantic genre of comics and was a beautiful book from beginning to end with an anthology of stories with the cream of Irish indy talent on board.

April was the month where multiple 2012 Irish Comic News Award winning book Nestor was released by Abandoned Comics. Created by Martin Greene and Mike Lynch and art by Paul McCallan, this first of two issues was an immediate hit.

In April Northern Irish comic company Pearlmoon Productions published Faust which is the first part of an adaptation of Gothe’s story of Dr Faustus. It was during the Autumn that the company announced that they were ceasing publication.

Elida Maiques Slow #3 was released at at the Independents Day market in April. A mix of strips by Maiques saw multiple issues released this year.