As we gear up for the launch of Fearless Defenders on February 6th in The Big Bang, the book which heralds the first Marvel Comics work for Cork’s Will Sliney you of course have to realise that Sliney worked hard to reach the point in which he now finds himself.
There was of course a time when Will was looking to forge his way in this business and way back in July of 2006, on the now defunct website Wizarduniverse.com, he found a piece of artwork featuring Wolverine the focus of a critique by a genuine A-list superstar artist Adam Kubert.
The following piece was found on the now abandoned web site irishcomics.blogspot.ie, a site that is the forebear to the Eclectic Micks web site that featured the work of Declan Shalvey and Will Sliney. It was a short lived site that only had 11 posts in all done.
Take a look at the piece in question and Kubert’s comments and for his efforts Wizard gave Will a free ‘How to Draw Book’ for getting his piece in front of Kubert. 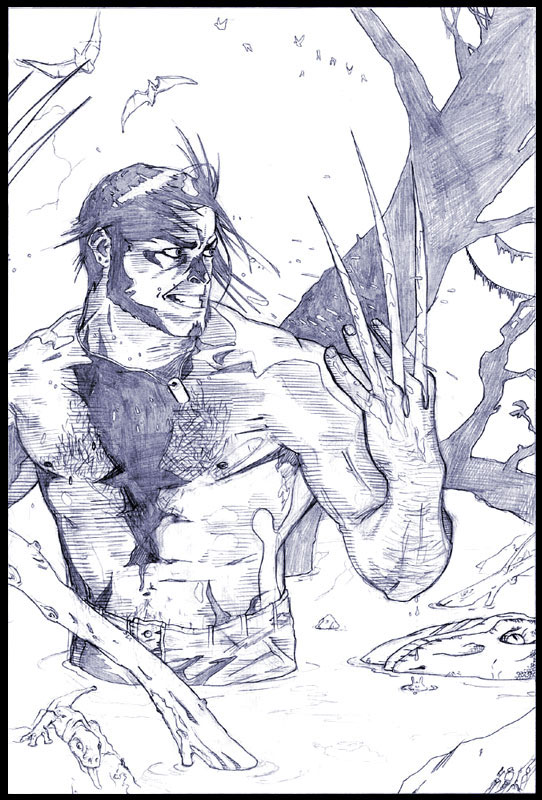 “I think this piece has a nice composition, the characterization is strong in his emotion and expression. Anatomically, it’s well done and the proportions are right on.
One improvement might be for the artist to add some reflections or concentric circles in the water around Wolverine to show he’s in water. I like the idea of the spray coming off of Wolverine…maybe the artist could’ve played that up a little more. It might’ve been cool to have blood floating on the surface of the water too.
The lighting is a little inconsistent, there’s a big black area in the middle of Wolverine’s chest that throws me off. It’s important to keep your lighting consistent. Also, the crop on Wolverine’s right claws is bad. The artist should try next time to get the entire arm into the illustration.
One other thing the artist might consider…If he adds a suggestion of a background it would give the illustration more depth. It could be something as simple as drawing in mountaintops where the base of the mountains could fade into a fog.”