1. ICN believes that anyone involved in the Irish comic scene is a hero and should be treated as such.

2. ICN believes that all Irish comic creators are equal regardless of their public success and therefore equal time and space is dedicated to small press and professional news. We feel that those just starting their first comic and those winning industry awards deserve equal praise and attention.

3. ICN aims to be an extremely positive place that encourages, nurtures, supports and helps all comic creators and as such will not publish harsh or severely critical reviews or posts. There are enough places on the web that will tell you why your comic sucks, ICN is not one of them. We will always focus on what is right with your comic. We want you to feel proud and happy to be a comic creator, not feel bad because your comic or current skill isn’t perfect.

4. ICN believes that Comics are a legitimate art form and will work towards the public and governmental appreciation of this fact.

5. ICN will work towards changing the public perception that comics are just for children.

6. ICN believes that we all could be doing more to help each other and the industry as a whole.

7. ICN believes that being positive, helpful and arriving with solutions rather than problems is optimal.

Raised in the wilds of Wicklow on a diet of 2000 AD, programmes like Quantum Leap and 80s music, David developed a deranged view of the world that he recently focused into writing regular columns for Irish Comicbook News. His influences include Bob Dylan, Hunter S. Thompson, The Beautiful South and ABBA. He leaps from one column to another, hoping that, maybe tomorrow, he will make the leap towards competence. 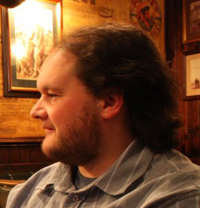 Patrick Brown is a writer/artist currently working on The Cattle Raid of Cooley, a webcomic adapting the ancient Irish epic Táin Bó Cúailnge. His influences include Eddie Campbell, Bryan Talbot, John Wagner, Hergé, Charles Keeping, Donna Barr and Eric Shanower. He attended the University of Ulster’s College of Art and Design in Belfast, but failed his Foundation year.

TOMMIE KELLY –
FOUNDER,  ADVISOR and
MAN BEHIND THE CURTAIN.

Tommie has been involved in the Irish Comic scene for a number of years. He founded ICN in 2011 and was Dictator for over two years. He is also writer and artist for DOWN, ROAD CREW, SOMETHING WONDERFUL, THE HOLY NUMBERS and THEM. You can find out more at http://www.tommiekelly.comor on twitter.com/tommiekelly or https://www.facebook.com/pages/Tommie-Kelly-Artist/142518669118099